M-Audio is a reputable company that’s been around for ages. Its products are known to be high-quality and reliable. Just look at Keystation Mini 32, for example. It’s a tiny and cheap MIDI keyboard that anyone on the budget can afford. Is it the best one out there? Definitely not. For the price, however, it’s a great product, that’s loved by beginners. There are a few pros to it, and a few flaws, which we will go over very shortly.

M-Audio Keystation Mini is a simple and nicely put together MIDI controller. It’s also tiny – you won’t have problems putting it in your backpack. That’s incredibly convenient for those who like to produce on the go and compose mostly with their laptops. If you have little space on your desk, but always wanted to get a MIDI keyboard to work in the piano roll tab in your DAW, that’s a perfect candidate.

The keyboard costs under $50, and comes off as a good bang for the buck. While it doesn’t have fancy drum pads, knobs, or faders, it still comes with a few controls that are mapped already. If you want to change a thing or two in your set, simply assign them different functions with the MIDI sequencer software application. 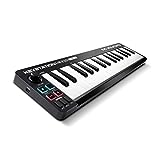 Keystation Mini 32 is designed in the most economical and ergonomic way possible. It only has 7 tiny buttons and the knob on the side. For someone who is used to a lot of controls, it may not be the best choice. However, this also depends on how you used the controls in the past.

If you actually utilized the full power out of each drum pad, fader, and knob, then you may look for something of similar size, but better functionality, like Akai MPK Mini MK2. If you just liked the look of the device, maybe it’s a better idea to downgrade and learn from the ground up? That’s up to you.

If you are a beginner, there is no need for all the controls. It’s fun to mess around with different effects, but it’s not worth spending more money on. Moreover, it will take you considerably longer to integrate all the extra pads, knobs, etc. in your workflow. If you don’t make beats literally daily, I suggest to avoid spreading your attention too much.

Keys are probably the most notable feature of M-Audio Keystation Mini 32, besides its size. You get 32 velocity-sensitive keys, which are needed to make your melody better. Without velocity added to each note, your track will sound robotic at best.

Maybe I should’ve clarified what that means for beginners who don’t know. That basically determines how hard you’ve pressed the keys. Based on that, each note will be assigned a value from 1 to 100 that indicates the volume at which it will play. That’s not a very common feature on smaller budget MIDI controllers. Very nice of M-Audio to add it.

It’s worth mentioning that sometimes the velocity isn’t recorded, which is a flaw that hopefully will be fixed in the future releases of the device. Some units are also known to have unevenly weighted keys, but the response is good enough. Considering that you are paying considerably less for this 32 key MIDI keyboard than you’d pay for a 25 key from another brand, it’s a worthy purchase.

Note that the keys are mini, which means you’ll have a harder time playing a melody if you are used to wider keys or have big and clumsy fingers (like me). Luckily, It’s not a big deal after a few hours.

Keystation Mini 32 doesn’t come with many, as you may have noticed already. It comes with octave range button, a knob that’s set on volume control by default, and pitch-bend and modulation buttons, which comes in handy when you work in your DAW. I loved the sustain button that I don’t often see on MIDI keyboards. That’s probably to make up for the missing sustain pedal input. Surprisingly, it comes in handy when you prepare a chord progression for your beat.

M-Audio Keystation Mini 32 works with all primary digital audio workstations out there and integrates pretty simply. It’s USB-powered and supports USB-MIDI connectivity. Another pretty cool thing is that you can use this bad boy with your iPad or iPhone, but you’ll need an adapter. Once again, it’s a pretty sweet on-the-go unit.

The MIDI controller comes with Pro Tools First, which is excellent if you don’t feel like investing $300+ into a software application just yet. You also get XPand!2 for free, which is a lovely freebie. For the price you pay, I didn’t expect any complementary add-ons and was happy to see a couple coming in a bundle with the device.

Whether you are just getting into music production, or already perform live in front of the crowd, Keystation Mini 32 is a useful and incredibly simple tool (almost forgot cheap). While it comes with its own drawbacks, such as the keys, it’s definitely fixable (you can turn off the keyboards ability to record velocity).

So far the developers have released 3 versions of the keyboard, and working on the 4th one. This shows that the product is doing pretty good. Price is one of the main advantages that makes Keystation Mini 32 stand out among competitors – it’s appealing to both beginners who are only working on their studio design and professionals who need a compact controller from time to time.