It’s been a while since Akai Professional took over the market of portable MIDI controllers with their beautiful keyboards that offer outstanding value for the price without hurting the quality of the product.

The first MPK Mini was a huge success, and the developers haven’t disappointed the customers ever since – in both mini and full-sized MIDI controllers markets – and have continued making quality products for every producer needs’. You’ll find the simple MIDI keyboards, advanced ones, and something in-between as well.

While Akai MPK Mini is nothing short of a gem, there are other keyboards in that price range that also do a great job at building MIDI devices on a budget without compromising the quality. We’ll talk about them after the review of Akai MPK Mini MK2.

First, let’s look at most popular MIDI keyboards in the price range similar to Akai MPK Mini that should be considered as well.

If you’ve had a larger MIDI controller or even digital piano in the past, 25-key MIDI keyboard will take some getting used to for sure. The keys are also not full-sized, so if you are used to playing the piano with two hands, you’ll have some learning to do.

If you’ve never had a MIDI before and never played the piano, you are in luck. While you’ll need to get the hang of it, you won’t have to re-learn everything you’ve learnt in the past. Once again, it can be a learning curve, but you’ll be fine.

Overall, the layout looks fantastic and is focused on getting the most performance out of every inch of the device. It might be compact, but it’s also incredibly powerful and flexible. While there are few changed from the original MPK Mini, the very essence of the keyboard has stayed the same, and it will still be a valuable asset to every music studio out there. 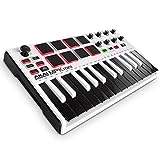 Akai is well-known for making quality products that don’t hurt your wallet. In fact, they’ve been around for a few decades now. Their MIDI keyboards have always been innovative and high-quality, and the respect for the brand is only going up as time goes by.

You know it’s a quality product that developers take pride in when you see one – from the unpacking process to feeling every key, button, and knob, to plugging it into your computer – there isn’t a single bump in the entire process. However, don’t expect it to be almighty and proceed to drop-testing it, or pushing it well above its limits. Akai MPK Mini is great, but it’s far from bulletproof. Like any other delicate product, be careful – the build is high-quality but fragile. Getting a case for your MIDI controller may save you a lot of hassle along the way, especially if you travel a lot.

For travelling or taking the MIDI keyboard outside of your studio, MPK Mini is lovely. It’s light and compact, yet packed with features. That’s why the price tag is a notch higher than similar 25-key controllers.

The controls are pretty sweet as well. For instance, the trigger pads look standard but have a really nice touch to them, plus they work incredibly well. Clearly, you can’t compare Akai MPK Mini with premium MIDI keyboards that can cost over $500, but it’s a lovely starter MIDI controller. Another concern of some producers are the mini-keys. Even though they are a little smaller, you get used to them quickly, and actually start loving them after a bit!

Similar to most other MIDI keyboards, Akai MPK Mini MKII is to be used with digital audio workstations. Luckily, the controller seamlessly integrates with any widely-used DAWs out there, from FL Studio and Reaper to Pro Tools, Ableton, and Logic Pro. If you’ve never before connected a MIDI device to your software application, you may find it a bit confusing. However, it’s only a matter of one Google search to get everything going in a span of a few minutes.

Akai Professional MPK Mini MKII comes with a few premium soft synths that you’ll fall in love with. You can pick either SoniVox Wobble or Air Music Tech Hybrid 3, which are both fantastic VST plugins that you can get at a very fair price of $0. Pretty good deal if you ask me!

To be completely honest, even without any digital add-ons, MPK Mini MK2 is a gem. But the developers decide to go above and beyond and also include MPC Essentials – kind of a software application made for Akai MIDI keyboards and controllers. While it’s not the most popular one out there, it’s okay if you don’t want to buy a DAW to save some money in the beginning.

While I always suggest investing in a software app and mastering it, you may not have a $300+ laying around, which is completely understandable.

Akai is a powerhouse of a MIDI controller, even the 25-key MPK Mini we are discussing. Being able to fit this many features into a product is a talent. Being on the market for decades, the brand has built a lot of trust in their affordable and high-quality keyboards.

However, it’s still worth it to check out some of the brand competitors that may have extra features that you may like.

LaunchKey series is one of the biggest successes in the history if Novation's brand. They’ve been around for a long time, similar to Akai, and they do look a little similar at first glance.

Both are powered via USB, which means they are always ready-to-go. Both MIDI devices are also compact and light. Moreover, both Akai MPK Mini and Novation LaunchKey Mini come with a set of premium VST plugins, which comes in handy in the beginning.

If you are concerned about the build quality of the latter MIDI instrument, there is no need – it’s top-notch. Clearly, you have to be careful as it’s made of plastic and has a lot of sensitive electronic parts, but that’s about it.

LaunchKey Mini MKII has twice as many pads, 16 as opposed to 8 on Akai. That’s definitely a good thing if you love creating your own drum patterns and loops, but pretty useless otherwise. If your choice of the digital audio workstation is Ableton Live, you may also prefer the Novation controller because it’s integrated very tightly with the DAW, so you’ll be able to cut a few corners along the way.

Finally, that’s ultimately up to your preferences, but both products are incredibly popular among producers and deliver amazing quality for an affordable price.

M-Audio is another powerful competitor of Akai that has been coming up with a lot of innovative products lately. Oxygen 25 comes with 25 velocity-sensitive keys, but here they are full-sized, as opposed to the mini. This may be appealing to some musicians out there who would want to upgrade in the future.

The increased size of the keys also means that M-Audio Oxygen 25 is bigger, heavier, and a little less compact to travel with. If you tour a lot or play at clubs and gigs, you may dislike the size of the device.

The MIDI keyboard is similar in compatibility settings and works flawlessly with all DAWs, and comes with a couple of freebie plugins as well. Moreover, M-Audio is well-known for one of the best customer service systems out there, which may be helpful to beginners.

It’s a few bucks more expensive than MPK Mini, but well worth the price, especially if you are looking for full-sized keys. Great bang for the buck for beginners and professionals!

Alright, next on the list of the Akai rivals is the well-known Arturia MiniLab. It’s a 25-key controller that looks a little intimidating. However, there is nothing to worry about – you’ll love it once you get used to all the controls.

One of the main differences between the two MIDI keyboards is the iOS support that MPK Mini lacks. That means you can connect it to your iPad or even an iPhone and produce on the go! In order to do that, it must integrate with Pro Tools, Logic Pro, and GarageBand – and it does! If you were worried about carrying your laptop places, with Arturia you don’t even need to do that – an iPad will do.

It also comes with cool features such as capacitive touch strips that control modulation and pitch bend control. You may have noticed the number of knobs as well! If you love going above and beyond in managing every plugin, 16 knobs will serve you very well, especially if you perform live.

Speaking of design, the Arturia MiniLab looks somewhat old-school or vintage, which is appealing to some users. The layout is user-friendly, but I personally don’t like the drum pads spread around so widely. By the way, you get a gem of a sound library when you buy Arturia MiniLab, with over 5000 sounds of different instruments that you can tweak up to your liking.

If you happen to be using MacOx based DAWs, want to have more control and customization over your live performances, or just like the retro look of the MIDI controller, Arturia MiniLab is the way to go!

And the last competitor of our contestant – Novation LaunchKey 25, one of those keyboards that may turn a few heads due to it’s cool and colorful looks.

As you probably know already, Ableton is big among DJs and producers that perform live. If that’s what you do or plan on doing, getting a LaunchKey 25 that integrates with the DAW seamlessly may be the right way to go for you.

With 16 pads as opposed to 8 that Akai has, you have more options when it comes to mapping your MIDI controller for a gig. While some producers don’t love the aesthetic of the keyboard because there is just “too much” going on, you can use this “too much” to your advantage once you get the hang of every control.

Moreover, the keys are full-sized, which means it’s easier to play but harder to transport. Once again, it depends on what you want to do with your MIDI device.

To sum up, the devices are similar, yet have their own pros and cons.

Now that we’ve talked about the competitors of Akai MPK Mini MK2, you have a better idea as of what you can find in a MIDI controller. Akai developed a high-quality, innovative and affordable product that beginners all over the world love.

The product is built with attention to small details and will last you a long time – don’t worry about that.

While there are other MIDI keyboards in a similar price range that make a choice a little harder, everything is up to your personal needs. The price point is one of the most competitive as it’s usually focused on beginners who are getting their first keyboard. As they grow, they stick to the same brand, so there is no wonder Akai, Novation, Alesis, M-Audio, and others are fighting each other to be the producer’s first keyboard.

That’s all true, no doubt, but Akai MPK Mini MK2 is still able to distinguish itself as a quality controller with fantastic features, control and customization options that are built with care and doesn’t hurt your wallet too much. If you have little space on your desk, travel a lot, and don’t mind having mini keys, going for a budget reliable controller such as Akai MPK Mini MK2 can be one of the best decisions you’ll make!