With the rapid expansion of musical production in the 20th and 21st centuries, there have been many developments from digital audio processing to auto-tune and so on. However, the dramatic change in music production came when the shift was made from analog production to the digital era which revolutionized music and paved the way for some modern greats in the business.

In the journey of music production, this article will give an introduction to the bass guitar virtual studio technologies or VSTs in common. While explaining the new terms, strengths, and weaknesses of VSTs to anyone who lives in the dark, the article will later discuss the best bass guitar VSTs that are on the market right now.

Starting off, a VST is an audio plug-in software interface that integrates software synthesizers and effects in digital audio workstations. In other words, VSTs use computer software applications to produce various tracks, chords, and sounds. To put it more simply, it means that one can download a software which sounds like a real musical instrument and play it virtually.

The users also can insert other music software apps to their digital audio workstation which are called plugins (aka VSTs). These plugins help the production in getting the desired tone in various fields such as controlling the attack of the drum, minimizing the sustain time and so on.

The uses of VSTs are vastly eclectic – they can be used in many ways. It could be used as a composing tool for an upcoming producer or it could help a bassist in editing the overall tone. Or it could be just used as an experiment to create something new.

The difference between bass VSTs and bass guitar VSTs are also important to note: Bass VSTs refers to all different low-end sounds, whereas, a bass guitar simply emulates bass guitars only. Therefore, a bass guitar VST is a bass VST, which is only a subcategory. There are a lot of synth basses that cover the low end as well.

Although present research suggests that there aren’t that many top-quality bass guitar VSTs in the market, I have narrowed down the best there are and provided a synopsis of the overall capabilities of the bass guitar VSTs.

Trillian is a product that cries out authenticity and brightness. Having a successful history of producing world-class virtual instruments from 1994, the products had been time tested and quality certified by many professional musicians including Charlie Puth.

The sounds happen to be bright and crisp with on-point dynamics which is a far cry with other VSTs. The plugin also provides a vast selection of pre-sets to try and tune the songs into, making the life of a producer much easier.

Hence, Trillian is an easy top-notch pick which brings a realistic bass guitar tone to the digital sphere which stamps a heavy authentic foot, unlike many others.

Now, this is a plugin with a twist. It does not use any sound samples but uses modal synthesis to produce its sounds which shifts the quality up to a professional level of audio production. This is also the first plugin that is created after studying real bass guitars on the market.

Modo Bass is a complete synthesis of bass playing and as such it lets you adjust and select virtually every aspect of bass playing. This means that Modo Bass can give you a limitless variety of bass sounds because, just like a real bass player, it gives you a different performance every time. This gives the musician the possibility to take unprecedented control of every aspect and control of a performance.

The sound in comparison with other plugins is very realistic due to the modal synthesis used and the difference between this synthesis and the sample library is clearly evident since the samples lack the realistic human touch more often than not.

Being more affordable than many other quality bass guitar VSTs in the market and considering the modal synthesizing over sample libraries, this would be a perfect plugin to an experimental producer who is just making the shift to turn pro.

This plugin was originally recorded with flat wound strings to get that warm, creamy sound of the 1970s disco and funk bass lines. The full strings of the bass were also sampled to reinvent the changes that happen when a bassist moves through low and high frets which therefore gave a rich and a natural sound with overtones.

It was also recorded through a DI box to give flexibility in sound production making the tone authentic and natural with all the sweet overtones.

Picked articulations available for the first time in a Scarbee bass provide the crisp tone heard on countless rock and pop records since the 60s. Avoiding Rickenbacker’s integrated foam muting system, palm-muted articulations were created with the pick hand positioned over the bridge, ensuring the realism of the true performance.

Open picked articulations were played between the pickups, and both were recorded using the unique Rick-O-Sound stereo output for classic Rickenbacker tone.

Rickenbacker is no stranger to any musician in the production industry with its unique tones and elegant designs. While many plugins are developed individually, this plugin had been approved by the Rickenbacker company itself making the value and the quality very high.

The tone is no stranger to the traditional Rickenbacker, crisp, realistic, and honest. Again, this too was recorded using a DI box which gives maximum flexibility for the producer. The main twist comes in the sound in its ability to pick different amps, EQ’s, and compressions. A producer can really dial in something special here.

The original sounds have been recorded by original Rickenbacker bass guitars which also serves as a go-to plugin to any professional producer who needs that Rickenbacker tone but don’t have an authentic guitar to pull it off.

The upside for this plugin is the sound of the native Rickenbacker guitar which is extremely unique. The price is also reasonable for a solid bass vibe in the production.

The downside is also the same sound of the native Rickenbacker guitar. While some musicians love its unique taste and vibe, it is not every musician’s cup of tea. So, there needs to be cautious when approaching this product. Also, this plugin is very CPU intensive (so if your PC is old, you may need to upgrade it). It would be better to switch to another plugin if the musician does not have a solid device for music production. 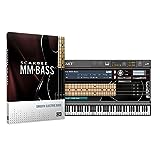 The best comes last, they say! This plugin makes some beautiful fat and persistent bass notes making it every film scorer’s dream VST.

Developed as a perfect companion to our critically acclaimed Scoring Guitars instruments, Scoring Bass rounds out the line with grooves and pulses created specifically to complement the guitars’ unique content. Quickly and easily build driving melodies and complex textures by running instances of these dynamic instruments side by side.

This VST comes with a ton of sampled bass guitar loops along with 3 bass guitar VSTs. The sound is gritty and makes the perfect recommendation for film score music.

Heavyocity had created a perfect plugin and it would be commended by any film score music producer. Therefore, this would be the ultima plugin for professional music producers to be used in recording studios.

Check out on Plugin Boutique.

In conclusion, out of the many bass guitar VSTs in the market, everyone has a different unique quality. However, the best VST would be the plugin that sounds the most realistic when it comes to bass parts.

The human ear is created in such a way to recognize authenticity when it especially comes to the bass notes and it would be vital to be natural as possible when producing bass notes in any kind of production. That being said, almost all of the VSTs in the article sounds very realistic that one cannot tell the difference.

So, at the end, the best VST is a matter of a personal selection according to the tastes and expectations of the musician.