*Yamaha YDP162 has been discontinued by the manufacturer.
The new model of this digital piano is Yamaha YDP163*

This is considered as the best choice in Yamaha’s popular Arius series featuring digital pianos. The YDP162 encompasses all the key traits which cemented Yamaha’s brand name in the industry; a classical sound, realistic playing and a classical outlook.

The YDP162 is created to satisfy players ranging from beginners to experts, meaning this piano offers a rich experience to every player alike.

Pro tip: Use the built-in, 2-track song recorder to practice one hand at a time. This will help players, in the long run, to drop some major hits in the future.

With everything that’s been going on in Yamaha, the main advantage of the YDP162 lies in its notability to the traditional looks and aesthetics. The cabinet of the instrument is larger than many digital pianos, giving it a fuller look, and the GH weighted action keyboard with synthetic ivory keys has a nice realistic feel.

The disadvantage of this instrument lays in the absence of the three-sensor key action found on Yamaha’s Clavinova series which is more expensive than the Arius series. Also, the YDP162 isn’t portable like the other models with it being weighing 63.6 kilograms. 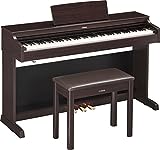 Sound Quality of the YDP162

This model gets its primary sound input by the PureCf sound engine which is loaded with sound sampled of Yamaha’s concert grand. This gives the piano a rich-sounding classical tone. The built-in 20Wx2 speaker system carries the sound forward.

The YDP162 also comes with an acoustic optimizer system that adjusts the acoustical flow by maintaining proper resonance and enhancing the overall sound.

The model also has 128 notes of polyphony, giving it the ability to play any piece of music without any flaw.

Key Action and Realism of the YDP162

The Graded Hammer of Yamaha is said to be one of the most realistic key actions available and this feature is embedded in the Arius series. These keys make the tone of the electric piano extremely close to those of the acoustic original pianos of Yamaha. The only downside to this instrument is Yamaha opting out of the three-sensor system which would have hammered the nail of the tone.

The synthetic ivory keys are also a great addition to this instrument giving it a rich look than other electric pianos and with all that’s been said, the YDP162 is one of the most realistic keyboards in the market in present times.

Other Features and Specifications of the YDP162

The main feature of the model which doesn’t include anything to do with the tone is the built-in two-track recorder. This feature enables the player to record using the right hand and the left hand separately.

This allows the beginners to record the track from one hand and play it back again. When the playback goes through, the player can practice the track more with the right hand while the piano plays the recording in real-time.

There is a touch sensitivity setting within this digital piano. This is something that not a huge number of digital pianos offer. The player has the ability to choose between Hard, Medium, Soft and Fixed options on the piano, opting for the one which suits your playing style. If the player finds that the keys are hard, it can be adjusted accordingly in order to give a more expressive style.

Features for learning piano are also a good addition to any digital piano. The Yamaha YDP series doesn’t disappoint in this regard. 50 songs are built-in to this piano, and the player has the ability to play them as demos or follow the included book “50 Greats for the Piano”.

Other features of the YDP162 include a duet mode, a three-pedal system, a headphone jack, 10 demo songs, 10 present voices, 50 present songs and 900KB of space for users to add their own songs, 10 separate drum patterns, USB and MIDI connectivity, a matching bench and key cover, and a 50 song songbook.

With its classical and authentic sounds coupled with the cabinet, the YDP162 is the perfect electric piano that provides the look of an actual piano. This allows this instrument to be a great choice for players who want to play electric, but still, keep that acoustic looks of the classics.

Fixed with an ivory keyboard that presents a realistic and resonating sound with a nine variety of digital features, the YDP162 encompasses every feature a player needs from a digital piano while keeping that traditional rich looking vibe of Yamaha making it the perfect junction of tradition and modernity at present.