It’s not uncommon to find yourself asking if there are actual differences between the digital piano, keyboard, and synthesizer. Of course, it’s not always common sense, and a lot of people may be unaware of distinct differences.

And that’s why I think that it’s a good idea to actually point out the key differences between synthesizer, keyboard, and digital piano – to make things a little less confusing and make sure you’ll never have to wonder again!

The main goal here is to help you understand what instrument will meet all your requirements and needs, so you can safely go for it and start learning. Alright, let’s shine some light on the subject already.

A digital piano is designed to function as a substitute for an acoustic piano. It almost entirely inculcates the characters of the instrument. Its construction is such that it resembles a grand piano or an upright piano.

The sound produced by it, most times, is the actual acoustic piano sound as it cannot usually produce any other sound (well, some recent models can do anything one desires), which is then amplified by internal loudspeakers.

If a digital piano is used in a bigger place, like a cathedral, for example, it’s often also attached to an amplifier and external speakers.

If you are going for a more expensive model, the instrument will likely have weighted keys, which imitate the “feel” of a real piano, which is pretty sweet.

These days, the keyboard is a generic term that pretty much refers to anything that has keys, much like synth and digital piano. In this case, we are talking about a smaller and more compact digital keyboard.

A keyboard can have any number of keys, starting from 25 and 49 and moving its way up to 61 and 88 keys. Therefore, the size will clearly vary. Another big difference is the fact that a keyboard can recreate a wide range of sounds.

Unfortunately, the instrument can’t really generate (read: synthesize) its own sounds, but instead only plays the preset sounds which were installed by the manufacturer.

The keys on a keyboard are usually unweighted or semi-weighted. If you go for the second option, get ready to pay 1.5 – 2 times more.

Unlike a digital piano, a keyboard is actually build to be carried around from place to place without occupying too much space or requiring a crew of skilled (or unskilled) moves to carry it. 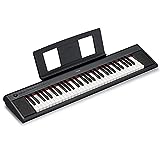 A synthesizer generates audio signals and converts them to sound, as opposed to pre-recorded sounds and samples you’d usually find on your keyboard or digital piano.

It can produce a huge array of sounds – anything from a human voice to ocean waves, to electronic sounds you hear when listening to EDM.

It is an electronic keyboard instrument that generates sounds that are not usual or conventional. After generating sounds, it sets them into the scale to allow for the musical application of such sounds.

Its way of generating sounds is by distorting audio signals which provide the user with an unending range of sounds that can be produced by turning a knob, pressing a button, and moving some faders. 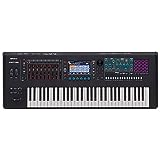 Synthesizer VS Keyboard VS Digital Piano

Knowing fully well what the three instruments entail and their various roles, it is important to consider a few points before getting one.

The Length Of The Instrument

This refers basically to the number of octaves present on the instrument which in turn translates to the length it.

It is crucial to consider this if an instrument with a wide note range is required (usually for complex music pieces).

An electronic keyboard would be a perfect pick for a newbie in music or a learner and can be bought for fairly cheap.

However, a student who is into classical music may need to get a digital piano, given the fact that he would have phrases that may demand pitches that only a piano with 7 octaves can give. As you may have guessed, digital pianos are also not the cheapest.

Weighted keys are absent in most electronic keyboards with 5 octaves (and even with all 7). It is, therefore, only reasonable to buy for an individual who would prefer portability over the “piano feel.”

Again, a professional piano player would naturally desire a keyboard instrument with weighted keys which makes a digital piano the best fit.

As stated earlier, the digital piano imitates the best features of an acoustic piano.

And as you may know, when a note on the acoustic piano is pressed, there are hammers in it that strike the strings. A digital piano may not have the hammer action, but it’s made to imitate the resistance. It’s a very good choice if you ever plan on moving to play a real acoustic piano in the future.

Before making a decision on which of these instruments to choose, you should be able to ask yourself what you want to use the instrument for. Would it be for practicing at home? Recording in the studio? Or performing at a live event?

You should always consider what you are hoping to accomplish before making a choice. Otherwise, it’s likely nothing more than money wasted.

It would not be expected of an EDM producer who creates music in his or her DAW to go for an electronic keyboard. Instead, he or she would naturally decide to buy a synthesizer. The same thing goes for a DJ who needs a keyboard for the setup.

You wonder why? A synthesizer, as it has been said earlier, is able to distort sound, there giving the producer the luxury of adding some resonance on the sound. In fact, some reverberation can even be done in real-time.

When putting place into consideration, an electronic keyboard (which can be used together with a computer) or a synthesizer will be perfect choices.

A worship place (read: church or cathedral) that prefers the natural sound of a piano can opt-in for a digital piano if their budget is relatively low. Alternatively, some places just like the ability to control the volume of an instrument, which isn’t as easy to achieve with an acoustic instrument.

With the little I have shared here, I hope that you have been able to figure out the differences between synthesizer, keyboard, and digital piano. I also hope you’ll have a much easier time picking an instrument for yourself – whether it’s to play at home, in your studio, or on stage.