A MIDI controller is one of the most useful tools in the studio, and in the past decade, tons of MIDI controllers have been released in the market for us music producers and musical performers to use.

If you want to be more productive in the studio, a MIDI controller can help with your workflow, so if you are a beginner in music production, getting one is a great idea.

I remember the first time I picked up a MIDI controller.

It was kind of a funny story.

Since I was new to music production and synths, I did not know that you have to connect a MIDI controller to a DAW or source to produce sounds.

I was just a guitar player who wanted to try adding synth sounds to my songs.

There were only a few MIDI controllers to choose from back then with little functions.

However, if you are looking for a MIDI controller now, you are in the best time period.

There are tons of MIDI players in the market right now.

Plus, MIDI controllers are very cheap, compared to analog synths with sound engines, and you can get a fantastic one for less than $200.

If you have no idea what features to consider when buying a MIDI controller, I got you.

The buyer’s guide will be at the bottom of the article – make sure to check it out!

In a rush? Here is a quick rundown for you:

All About the "Feel" 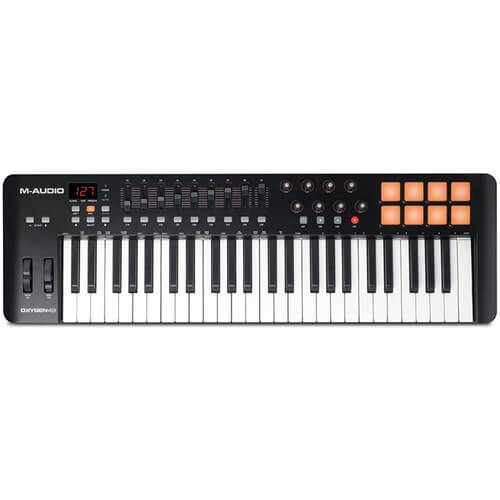 The M-Audio Oxygen 49 MK IV is an excellent MIDI controller.

It features a combination of 49 keys, pads, transport controls, knob, faders, and more.

This option is a must-have in the studio, especially if you are going to make music that involves piano playing.

You can get the Oxygen MK IV in 61 and 25 keys. They are equipped with keys that feature good resistance that piano players can appreciate on a MIDI controller.

This option has a USB i/o, a sustain pedal option, a set of velocity-sensitive pads, and it only weighs 7 lbs, which is pretty good for a 49-key midi controller.

This option is an excellent choice for your music studio or for playing live.

It has an auto-map feature that will automatically map its faders and controls to most DAWs such as Ableton, Logic Pro X, Pro Tools, FLStudio, and many more.

Overall, the M-Audio Oxygen 49 makes an excellent choice for both beginners and pros alike.

It looks sleek but most of all, it is highly functional and works with almost any DAW, including your phone. 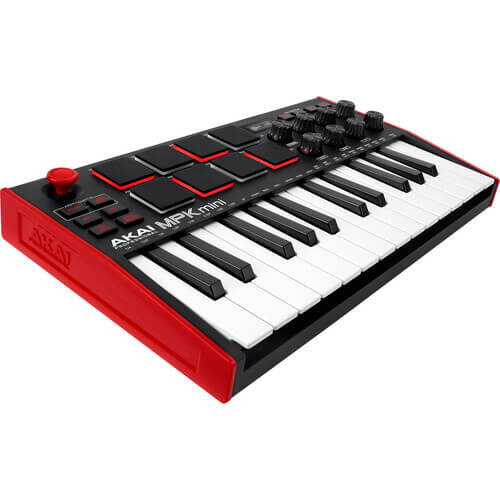 The Akai MPK Mini MKIII is probably one of the most popular MIDI controllers on the list.

I see this model almost everywhere on YouTube and in live shows.

A lot of people use this MIDI controller, and the MKIII just got a lot better.

It is now equipped with transport controls, so you can easily record music on your DAW without using a mouse.

The MK III is also a lot more durable than the MKIII.

Unfortunately, I did break my old Akai MPK Mini MKIII a while back during a live show.

I probably hit the cheap plastic keys too hard, and if you have ever played live before, you will totally get it.

You can also have fun with the built-in octave selector.

It is also equipped with a pitch and mod joystick for easier sound manipulations.

It also comes with a built-in arpeggiator so you can make creative chord patterns.

You can double-tap the tempo button to make timed rhythmic patterns.

Overall, the Akai MPK Mini is still one of the best smallest options.

You can take it anywhere and record music on the go with your laptop or iPhone.

The only thing that I didn’t really like about this option is the tiny keys.

Well, what can you expect with such a compact device built with a lot of functions?

The keys will be compromised. 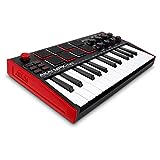 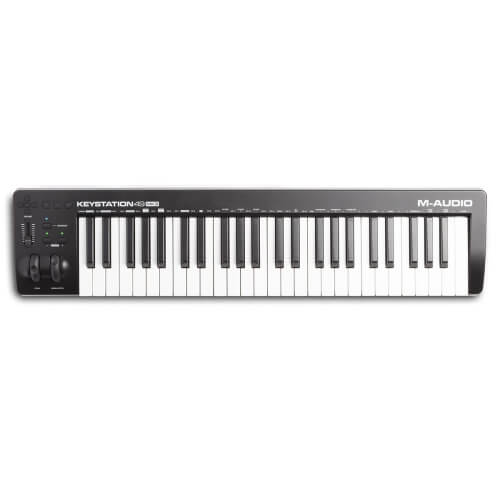 The M-Audio Keystation 49 MKII is all about the feel.

It may not have pads or knobs, but it has one of the most natural and realistic piano feels.

The keys are semi-weighted and springy with enough resistance that piano players will appreciate.

It may not feel exactly like a piano, but it is the closest you can get in a MIDI controller in this price range.

This MIDI keyboard is pretty straightforward.

It does not have the knobs, sliders, faders like on most modern MIDI players, but it is a perfect choice for people who just want an excellent MIDI keyboard for playing and recording virtual instruments instead of a MIDI controller with transport controls.

It is equipped with a USB port and sustain pedal out, which is pretty straightforward, especially if you are a beginner.

It is equipped with basic controls such as the pitch and mod wheels, making it an excellent choice for synth lead players as well.

Some music producers may vary with their preferred MIDI keyboards,

Some like full control over their DAW, while some just need keys for recording with virtual instruments.

The M-Audio Keystation 49 is for the latter.

This MIDI controller is all about the feel of the keys, making it a perfect choice for every piano player.

If you are in need of a simple controller, the M-Audio Keystation 49 makes a wonderful choice. 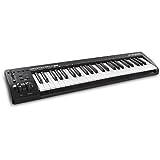 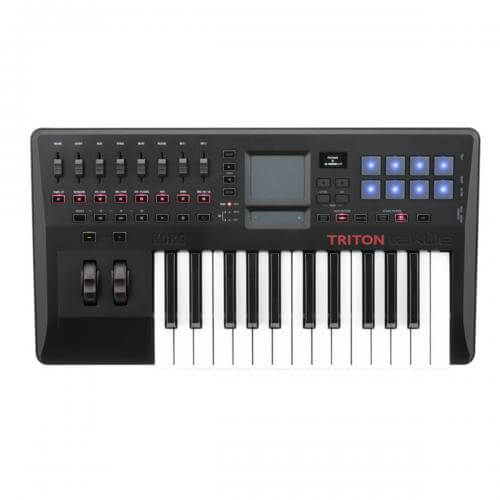 The Korg Triton Taktile 25, like the Akai MPK Mini MKIII, is another compact MIDI controller, however, the keys of this option are much bigger with better playability.

It comes with an X/Y pad that allows you to play expressively.

If you are familiar with the Korg Kaossilator, the built-in pad feature works like that.

It allows you to modulate the sound in real-time using filter effects such as cutoff, resonance, attack, decay, and more.

This hybrid MIDI controller is equipped with an arpeggiator, pads, knobs, and keys.

The pads can be assigned with chords or you can use them to play drums.

This MIDI controller would have been so much better if it came with at least 49 keys. 25 keys are not enough to enjoy and maximize the features of this model.

The Korg Triton Taktile makes an excellent choice for both touring musicians and music producers.

If you are looking for a feature-rich MIDI controller with nice keys and onboard sounds for gigs or for music production, this option is worth trying out. 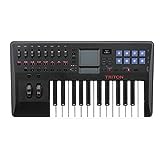 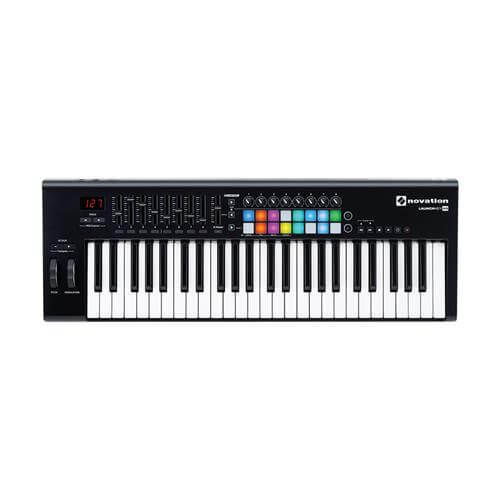 If you heard about the Launchkey Mini, wait until you meet its big brother the Novation Launchkey 49. This MIDI controller is an all-around choice.

It features 49 keys, and it comes with a lot of faders and knobs to do the job.

It comes with  DAW transport controls and functions that give you full control over your DAW.

It may have tons of features, but it is pretty easy to understand, even if you are a beginner.

It works best with Ableton Live, but it can still work pretty amazing with other apps such as Logic Pro and Pro Tools.

The Novation Launchkey 49 is a worthy mention and a great alternative for the M-Audio Oxygen. 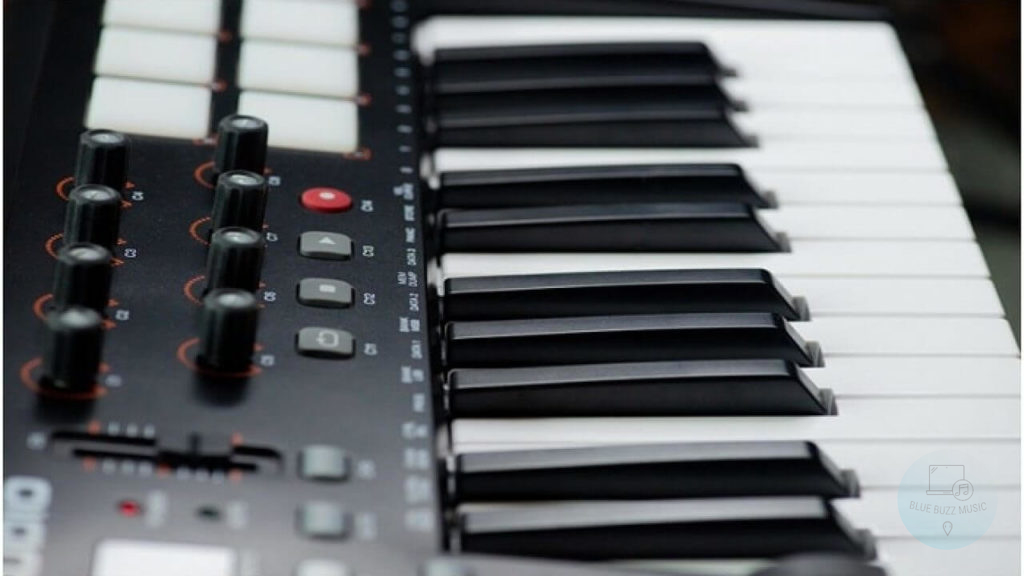 Here are some of the features to consider before buying the best MIDI controller under $200:

If you are a piano player that is used to using full-sized keys, make sure you don’t pick up one with smaller keys.

It will mess up your playing, and you might take a while to adjust when you go back to playing regular-sized keys.

Nowadays, there are compact MIDI controllers with only 25 keys, which is great if you want to produce music on the go.

Most of these MIDI controllers have a switch octave feature so you can choose the high or low notes.

However, if you are a piano player, you might find it hard to play big chords with only 25 keys.

These MIDI controllers are built for playing lead sounds, and simple 3-note chords only.

If you are a piano player, you should get a 49 or 61-key MIDI keyboard controller instead.

They are still portable enough, and you can still play piano pieces that require more octaves at once.

Again, if you are a piano player, make sure you choose a MIDI keyboard controller with weighted keys to give you the resistance you want when playing.

Although it is pretty hard to find a MIDI controller with weighted keys. You will have to settle for semi-weighted synth-style keys if you can’t find one.

They might not have the same feel as digital or acoustic piano, but semi-weighted keys are the best you will get in this price range.

Most modern MIDI players have transport controls for your DAW.

This feature makes it easy to navigate through your DAW and record music without reaching for the mouse.

Some options have an automap feature, so you wouldn’t have to spend hours trying to program your knobs and faders.

Make sure the MIDI controller you buy has enough faders and knobs that are suitable for your playing and production style.

One of the best things about modern MIDI players is the pads.

You can use them to trigger samples and play drums.

Make sure you choose one with velocity-sensitive pads for better feel and dynamics.

Some MIDI controllers have a Bluetooth connection and other features like an arpeggiator.

However, I still recommend a wired connection.

Most MIDI players need only one USB cable anyway, so it shouldn’t be a hassle. Bluetooth connections might have latency, which can again, mess up your playing.

Some MIDI controllers feature a pitch and mod wheels or a pitch joystick that allows you to manipulate your sound in real-time, which makes a good choice for playing live or recording automation.

Some choices even include an X/Y pad for even further modulation and filtering. 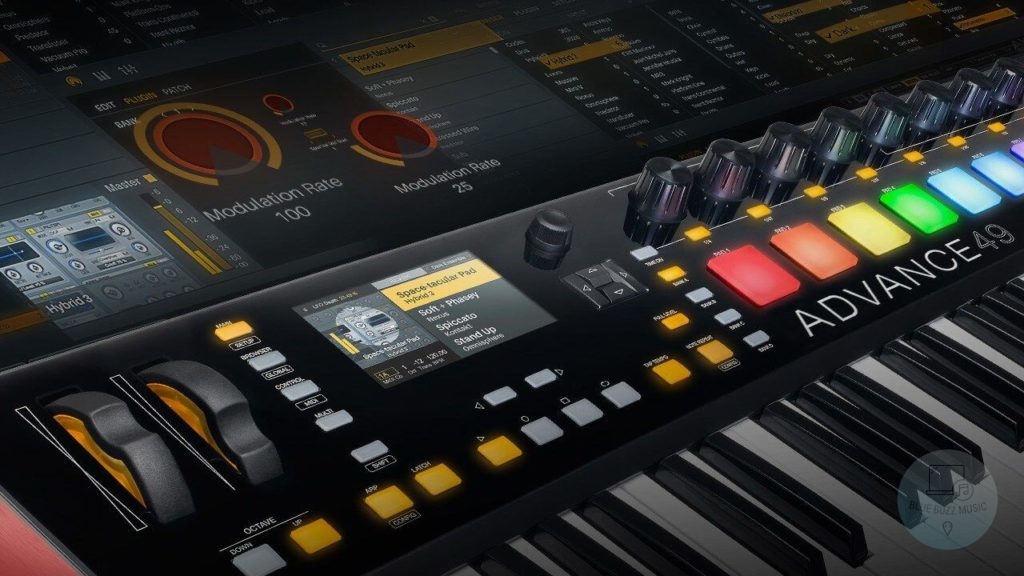 Can you play live with a MIDI controller?

Yes, most modern MIDI controllers are designed for both recording and playing live. Make sure you bring a laptop or iPad when you play live.

Also, make sure you have set your presets ready when you are about to play live.

Can you connect your MIDI controller to an iPhone or iPad?

Yes, you can connect a MIDI player to your iPhone or iPad.

All you need to do is buy a Lightning camera connection kit.

It is designed with a male lighting and a female USB port, so you can directly plug it in your iPhone or iPad.

If it does not work, you will need a powered USB hub to provide the MIDI controller with enough power.

I have been using an Akai MPK Mini MKII with my iPhone 6 for a long time for playing live, just because I like to be minimal at times.

It really works for playing live without breaking down and causing any problems.

What are the best iPhone apps suitable with a MIDI controller?

The ones I used the most were GarageBand, Korg Gadget, and Akai MPC essentials.

There are a lot more apps such as the Moog app and other mobile DAWs you can use if you decide to use a MIDI controller with your iPhone.

The best MIDI controller under $200 is based on what you need.

There might be a lot of decision-making factors, just remember to purchase a MIDI controller that will suit your needs.

I hope this article helped you choose the best one for you, and I hope you enjoy making music.