Flute VST’s aren’t nearly as popular as other synth VST plugins, but they are an essential part of any producer’s essentials bundle.

If you are a producer who writes film-scores or a person who simply likes to experiment with different sounds – this type of VSTs is for you!

In my opinion, the best flute VST’s actually sound incredibly realistic and dynamic, despite being generated electronically.

Along the way, you may have found some plugins that just simply sound bad, however, don’t let this discourage you.

Maybe this list will do a better job picking the right flute VST plugins for you!

Note: I’ve personally tried all of these samples and VST’s below and picked out a few of the favorites that I feel are the highest quality (while not always the best bang for the buck).

If you came here for free flute VST plugins, they are just down the list!

Hollywood Orchestral Woodwinds was designed to be the most detailed collection of orchestral woodwind instruments ever assembled and offers unprecedented control over the sound of the instruments.

The sounds on the EastWest woodwinds are incredible.

In particular, I love the flute sounds.

What I really like about this plug-in is the sound and effects.

It’s extremely easy to use once installed and it’s of incredibly high-quality.

I would recommend this to music producers who are working on film scoring as these sounds were developed specifically for films.

Speaking of microphones, with this EastWest Quantum Leap Hollywood Woodwinds Diamond Edition, you get major flexibility when it comes to how you want your instruments to sound.

In fact, you get to control five mic positions to get the desired results.

Go ahead and adjust the main, mid, close, surround, and alternate room mics to suit your ear’s every wish.

You can also experiment heavily with articulations after the fact to get just the right feel for your score.

The plugin features some of my favorite flute sounds that you can get from a VST these days.

I really like how much I can tweak each sound as well.

On the bottom left of the plugin, you will notice that there’s an attack, sustain, hold, decay, and release button.

You can use these to instantly tweak what you’re working with in the sound department.

This is a CPU intensive program, so be sure that you have a fast computer or laptop to run it on.

With this being said, I think this is a great VST that you will get a ton of use out of.

Considering that it works on both Windows and macOS, it’s a no-brainer for either side of the industry. 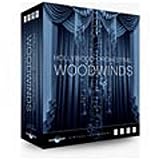 This is a stunning flute VST plugin to play with. I’m no expert in the genre, but even my rather amateur attempt at using it as a background sound made me realize that even a beginner can do this.

It features a few very versatile sounds, which can be used in music production in many styles.

Though it’s traditionally an Indian instrument, it sounds right at home on most other tracks I put it on.

Somewhat similar to an orchestral flute without the full range, the more earthen tones give it a lot more depth and warmth.

It is a definite consideration if you are looking for a good solo flute.

Impact SoundWorks is no stranger to making great products.

With this you are getting a ton of different woodwind sounds that all sound realistic.

The dynamics are key with the Ventus Ethnic Winds sample pack.

This is available through Kontakt, just like a bunch of other sampled instruments.

You can program different attacks for each note that you play and I think this is pretty awesome.

My favorite part of this VST is that you can program the vibrato to aftertouch.

This means that if your MIDI keyboard has an aftertouch feature, you can play a melody and use vibrato by holding notes down.

This leads to some incredibly realistic sounding instruments.

The Bansuri is a 6 or 7-hole bamboo flute about thirty inches in length which is blown from the side (transverse).

The instrument dates as far back in history as 1500 BC as a widely used instrument in sacred Hindu music, often paired with the Sitar and Tambura to provide drone accompaniment.

This is a rather expensive woodwind sample pack.

However, if you can afford this bad boy, you won’t regret it.

Impact SoundWorks is truly doing a great job with their VSTs and samples.

Note: Ventus Ethnic Winds works great for keyboard players and music producers who are going to be recording the melodies and using samples (in their DAW, for instance).

Passion Flute is another winner for Orange Tree Samples.

It has pretty much everything a rock and jazz flute enthusiast could want: great sound, incredible playability, realistic scripting, and lots of options for tweaking.

The controlled random percussive cliffs used in your mono mode, matched with the beautiful sustained flute in which vibrato and key noise can be added, in addition to your other creative programming, makes this a great virtual instrument for a wind synthesist to have in their collection.

Passion Flute is an amazing sample pack from Orange Tree Samples that is great for many different styles of music.

If you are a fan of the Impact SoundWorks samples, you will love this flute VST as well.

This is probably the best playing sample pack that I have played.

The dynamics are unreal when you play the parts in from your keyboard.

I always say that using a keyboard helps with producing music and this sample pack is a testament to that statement.

With this sample pack, you are getting 1.15 GB of flute sounds.

While the library size is beyond impressive, you have to remember that it’s also incredibly “hungry,” and will need a PC with a good CPU and plenty of RAM.

I personally love the overall sounds of these samples.

The dynamics really set it apart from many others.

It has different effects and phrases with growls, screams, and flutter-tonguing that sound great.

Modeled vibrato is a feature that I really like as well.

It is modeled after real-sounding flutes to give it a nice and crisp finish.

Overblown notes are something a little bit different, but still super cool.

It does exactly what it sounds like by creating playable harmonics.

One of my favorite flute VSTs to date.

I think Passion Flute has a lot to offer to all music producers.

I thought it would be also worth mentioning the best free flute VST plugins, as a lot of the time, it’s better to invest in, let’s say, a better audio interface or studio monitors / headphones, than in a plugin (especially at the very beginning of your journey).

This free flute plugin is designed to be an addition to your DAW (as opposed to a standalone software).

If features high-quality Indian flute recordings in 24 bit – 48khz sample rates, which results in a much more dynamic experience.

With multiple velocity layers, 6 variable effects, and a price tag of $0, you can’t go wrong with trying it out.

The only drawback is that it’s not compatible with macOS.

This freeware flute VST is a sample library of flute sounds that were edited from the Sonatina Symphonic Orchestra.

While likely not as versatile as a premium flute plugin, it’s definitely something to give a shot.

This bad boy is pretty straightforward.

It’s essentially a sampled auto flute created by the Electronic Music Studios at the University of Iowa.

Besides the basic functions like volume and panning, you can also tweak relief, sustain, decay, and attach knobs to get the desired sound.

It’s also really nice to use with your MIDI keyboard – simply assign everything to the knobs on your device and you can control the sound in a more hands-on matter.

Have you heard of Kong Audio’s ChineeWinds Chinese Flute VST?

Well, Mini DiZi is the free version of the plugin (kind of like Zebrallete).

However, don’t let the price tag fool you – this free flute VST is actually pretty sweet, covering Xiao, Tenor DiZi, and a few other expression styles to give you a taste.

If you love it, then maybe you’ll get a premium version eventually.

They also have a small library of MIDI files, which were specifically designed to sound their best with ChineeWinds.

This will help you get a better idea of the fundamentals of how a dizi should be played, in case you aren’t familiar with it.

There isn’t much I can say about this plugin. It’s incredibly simple and does what it says – imitates how an actual flute would sound in real life.

The design is user-friendly, and the sounds generated actually resemble a flute.

Overall, an excellent free flute VST plugin that you should give a shot.

What to Look For In a Flute VST?

What factors should one base their decision upon?

Ultimately, the sound is going to be the most important.

Sometimes you will find certain VSTs that just sound really good, even if they’re free.

As long as you are getting good sound at the end of the day, the price tag doesn’t matter.

How Many Instruments Come with The VST?

Thousands of plugins exist, both commercial and freeware, and many audio applications support VST under license from its creator, Steinberg.

That’s right, Steinberg created VST (which did blow my mind at first).

Certain VSTs or libraries will come with a bunch of different instruments that you can experiment with.

Since we’re looking at flutes, maybe look to see if these VSTs also include other wind instruments.

Often times they will and you will be able to find sounds that you can use for your production.

Included with the sound will be the dynamics of each sound.

Does it capture the realism of how a real flute would sound?

These days, a lot of companies spend some quality time capturing excellent samples and it really shows in their products.

MY EXPERIENCE WITH FLUTE VST Plugins

I have been using different VSTs with my FL Studio for about 6 years now.

I’ve found that modern production is basically becoming a game of who can be the most creative with their sounds.

You probably wouldn’t expect to hear many flutes in pop music 10 years ago.

Now, however, it’s something that really wouldn’t shock me one bit, especially with all of the effects you can add with almost no effort.

If you would like to dive deeper into some more sounds, check out my section about other VST plugins.

The world of music production is ever-changing, so be sure to stay up to date by checking out new sounds (and trends in music) as much as you can.

Do you have any experience producing or using flutes?

If not, you’ll get a hang of it very quickly, don’t even worry (especially with these flute VST plugins that essentially do the job for you).