Alright, so now you want to find the best budget microphone to record your vocals. I know it's really hard to decide which one to pick because there are literally hundreds of them, if not thousands.

And the range is pretty huge too. You can find condenser and dynamic mics starting from $20 and going all the way to thousands.

At this point, a lot of people feel lost, and I don't blame them.

Remember I tried to save a few dollars and ordered a $30 microphone off amazon with pop filter and little mic stand included. As you can probably guess, the quality was anything but high. And I mean it makes sense.

All the stuff included plus shipping was only 30 dollars!

If you think about this logically, even the most efficient and cost-managing factory in China can only do so much for this little money, no matter how high the volumes are. Therefore, you have to use common sense.

Anyways,  let's get to the point of this article!

How to find the best budget microphone to record your vocals?

There are 2 main categories of mics: condenser and dynamic. There are a few subcategories for each one, but we won't get into the details in this article.

First things first, both types  can be used for vocals, drums, guitar, and everything else.

Is it recommended to use the same microphone for everything? Of course not.

That's why if you ever go to a professional recording studio, they will have 10s of different microphones, each one for different purposes.

A few notes before we start:

When to use condenser vs. dynamic mic

Most of the microphones you see in the music studios are usually condenser mics. And the ones you see on stages and during music festivals are dynamic microphones. This is the general rule of thumb, which is not quite the case.

It's an assumption and it's not always true, but it's out there for a reason.

It's because condenser microphones tend to be more sensitive than dynamic ones. Again, it's not the case for all of them, and you can find very sensitive, for-studio-only dynamic microphones as well.

Do dynamic mics need a power supply as well?

Most dynamic microphones don't need a power supply as they don't have the impedance  converter that has to be charged. 99.9% of condenser microphones do.

Let's put it this way: they are more forgiving. In general, condenser mics tend to be both more fragile and sensitive and more expensive. Therefore, they are more “suitable” for live performances. However, I know a lot of artists who use condenser microphones on stage.

For instance, look at Shure SM87. 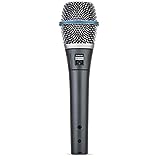 It may look like a dynamic microphone (its shape, for example), but it's a handheld condenser microphone!

Hope this example helped to prove my point that you CAN use condenser mics when performing as well.

You don't have to know everything about microphones, but it's good to have a general knowledge at least. Let's talk about the two main categories now.

As I mentioned earlier, condenser microphones are used for recording vocals a lot more than the dynamic ones.

And let's be real, you've seen them a million times on TV or YouTube when a famous rapper is being recorded in the booth.

To start, they require a lot less gain at the preamp because they receive phantom power from the interface. As a result, a higher output is achieved, so you don't need as much gain added.

For dynamic mics, you need a good, usually quite expensive preamps that will supply enough gain without introducing too much noise.

Another big difference is the frequency response.

In the case with dynamic microphones, you can usually get a pretty good response up to 13-15 kHz. After that, it rolls off quite drastically.

Condenser microphones capture a lot more of the high-end frequencies, up to at least 20 kHz usually.

Therefore, you get a lot of the “breathy” vocal sounds, which would've been rolled off when using a dynamic mic.

Lastly, note that they are usually more fragile, as there are a few components that can break easily if you drop the mic (tube, diaphragm, and the metal plate, for example).

It's usually not a big deal unless you travel a lot. If you do, there are lots of cases you can buy to protect it from an impact of some sort.

A good example of an affordable condenser microphone is Behringer B1. 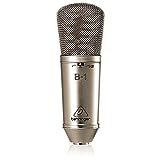 You should also check out the article about the best condenser microphones, where I've reviewed the most reliable and reputable condenser mics for your budget home studio!

Alright, I don't want you to bore you too much, so let's move on.

You will usually see these guys in the bars and on stages, as I mentioned earlier. There are a few reasons for this.

First, they tend to be more durable. And you definitely need something robust, especially when music and alcohol are involved (think bars and concerts).

Dynamic mics also tend to be a little cheaper.

If you perform daily or going on a tour, you probably don't want to take your $1000+ condenser microphone with you.

Most dynamic ones will do just as good, and you won't have to watch it and worry about it constantly. It's not a big deal for big guys who make millions on a tour, but even they usually prefer dynamic mics.

Another thing is the sensitivity.

If you've ever been to a concert, you know how music blasts. By being less sensitive, in general, they tend to last a lot longer.

I almost forgot to mention that this kind of microphones works really well with percussive instruments, such as snare drums, and guitar amplifiers. Moreover, dynamic mics will suit loud, “screaming” vocals a lot more.

An example of a robust, and affordable dynamic microphone is Shure SM57-LC. 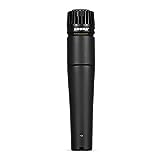 Want to know more about dynamic mics and see the best picks? Then check out my list of the best dynamic microphones!

I know you were looking for the best budget microphone to record your vocals (do you want to improve your singing voice?), but there is no such thing. Each one has its own purpose.

Condenser mics tend to be better at capturing a vocal take, but as I said, it's not always the case.

Condenser microphones would be great at recording you rapping and singing.
If you are looking to buy a mic to record your guitar and/or drums, go for a dynamic one instead.

Before purchasing one, do a little research on it, look at its stats. Then maybe see if there is a reputable review on YouTube. And then make a purchase and get ready to rock!

This chapter is a part of the  guide about how to build a  music studio at home.