Want Free Samples, Loops, and Sound Packs?
*Get Them Here*

Usually, the more modern musical genres are thought to be more complex and complicated when they switch to the new technical aspects.

But in retrospect, this is just as true as saying the yeti is real or you have seen the bigfoot somewhere in a cold place!

Music will not develop and continue if it’s all stagnant and doesn’t go with the flow.

This couldn’t be truer than the genre of hip-hop.

With its traditional dance moves and funky music updates, the genre is now taking its turn to embed technology in their musical productions and Music Production Centre – or most commonly known as MPCs, is making the magic work.

Starting with the Akai MPC drum productions, the field had come a long way in producing some of the best MPCs which this article will review later on.

Though the criterion will be discussed later in the article, it is always advisable to get a high-quality MPC that gets the job done, even if it’s the first attempt of trying the instrument out.

Hence, this article will be looking at the top 5 MPCs for beginners along with the considerations needed to make a purchase and how to get the best from the newly acquired beat machine.

What’s would be the top pick of mine?

Definitely the Akai MPC X Drum Machine – and here is why:

This would be an obvious well-known fact for anyone in the hip hop production genre.

For those who aren’t, Akai drum machines and samplers are the best in the business so far.

They have stamped their dominance in the hip hop market and now they are the leading beat making machine in the industry.

Having a rich and dominating history dating back to 1984, the samplers are now used in almost every genre.

But hip-hop has a special place in the dynamics of the company. The benefits of the Akai machines according to them are;

Now, let’s look at our contestants:

This is a well-known drum machine in the Akai series which very common in the hip-hop genre.

The machine is a pattern based and linear 64 track drum machine with 32 midi channels.

Is also has a 32 voice drum and phase sampler with 128 RAM which makes it very fast and easy to deal with.

The velocity and pressure-sensitive pads are a highlight to this machine which makes the programming and sequencing much easier.

The 2 Q link sliders help the performer in live acts and gigs with real-time control and performance.

It also has a built-in flash drive and USB port for storing files and easy setup.

Additionally, the drum machine comes with both analog and digital inputs, a headphone output, and 2 MIDI ports.

This gives the user a set of choices to act with when hooking it up to other equipment. 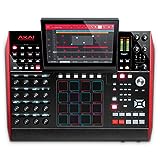 This machine is one of Akai’s high powered versions which has a lot of features useful at different times.

It also has 9 gigs of unique sounds that can be blended offering an enhanced level of creativity.

The MPC Renaissance is also equipped with 16 MPC pads and 16 touch-sensitive Q-link controls that help increase the effectiveness of the workflow.

Other features of the machine include an XLR ¼ input port and also has turntable inputs that help to import samples from any saved place.

The machine also has its own 4 channels USB audio interface giving the user easy control of the audio along with 2 MIDI inputs, 4 MIDI outputs, and S/PDIF I/O that connects to as many extra gears as needed.

This professional MPC offers more features than what a regular machine would offer.

The machine had also been upgraded and designed to give the extra look of professionalism and creativity making it a sight to behold.

Also, this USB powered workstation is very portable, unlike the other counterparts, weighing less than 2 pounds.

The machine comes with large knobs, scroll wheels and an aluminum wheel that improves the experience each time while being used.

Other features include 16 MPC pads and 4 control knobs that give many when it comes to living production. However, this can be used in studios as well.

An added feature unique to this machine is the fact that it comes with 7 GB of sounds making it easy for a user to use it out of the box.

This is a more advanced model in the Akai series.

Aided with a 7-inch color display that makes navigation very easy to use, the machine boasts of user-friendliness and high quality. Is also has 16 velocity-sensitive pads with backlighting that helps to make the beat making process very enjoyable.

Other features include a 2 in and 2 out the audio interface, a step sequencer with touch interface and an XYFX control that eases the effect addition and gives the user an ability to add effects on the go.

The machine also has a unique phrase looper that allows any instrument to connect and create a loop – a difficult feature which is time-consuming in other machines.

The machine also boasts a pad mixer for setting the levels and also for stereo panning and adding effects and unique sample edit controls that help the user trim, chop and process the samples without any stress.

Check it out here.

This machine which is a 16-bit device with 2 MB memory that can be expanded to 32 MB is polyphonic with a 32 voice MIDI control sampler that makes chopping and sampling very easy.

Other features include a built-in floppy disk with a SCSI and sample data support from the S1000 and S3000 samplers and lots of unique libraries.

The machine also supports.Wav files and has 16 velocity pedals for quick and easy beat making.

Check it out here.

Things To Consider When Buying an MPC

Here are 4 main things to consider – let’s take a look:

This probably is the main criterion for choosing any product in the present.

For any beginner, the best option is to get something of high value with high quality which will also last for a longer time.

But this again should be in sync with the budget.

The most common temptation is to go for something cheap and less quality since it’s the start, but in hindsight, going for a more durable object with some high-quality features has a ripple effect in being more creative with the smoothness of the machine and ultimately, having more fun.

Getting something more advanced will also save the trouble of getting new equipment with high-end features in the future which again will cost more money.

So as a rule of thumb, it is best to choose an MPC on the middle ground, not too high end, but not too low quality either.

To put in simpler terms, what the machine will be used for.

When it comes to hip-hop, there are two choices – studio production or live productions – and an informed decision has to be made.

The purpose of the instruments being used in these two categories differs a lot from each other. While some machines are better for studio operations, some machines have been carefully crafted for live performances to fit into the likes of the DJ.

But for a beginner, it’s in the best interest to go for a product that can be used in both the varieties. A brand like the Akai MPC samplers would be a good recommendation which will be discussed later.

The same point above, but with a different context.

There are multiple features in MPCs that won’t be featured at all, simply due to its vast majority. Hence, it is vital to select a machine that has a bit of everything.

In hindsight, if the purpose of using these machines is the same as drum machines and samplers then the respective machine must have those features.

Doesn’t really apply to MIDI and pad controllers, but we’ll cover this anyways.

Sounds are a major talking point in the music industry and rightly so. The sound again depends on the quality of the machines and in part, the musical values they represent.

While some machines offer smooth and crispier tones others will offer more heavy tones about the genres of rock.

Hence, it is vital to go for a personal informed choice of a machine that alludes to the personal taste of the performer rather than just going with the flow.

The MPC machines mentioned above are the top-notch products in the market which will perfectly suit a beginner in his musical journey.

Though the prices are relatively high, it is easier to get a good quality instrument instead of buying a low cost and version and spending again for a high-quality version.

Apart from that, the machine needs to be intricately dealt with in the same way as an acoustic instrument.

No votes so far! Be the first to rate this post.